Level 4 Clipper Race Training is the last of the 4 weeks of training that Clipper provide for the amateur crew on the Round the World yacht race. I was both nervous and excited, firstly because I knew it was going to be the hardest training yet and it would be the first time I would crew for my skipper Andy Burns. I was desperate not to let my team mates or Andy down and spent the weeks leading up to Level 4 revising evolutions. I also amused those at the farm no end tying knots around things including myself with the larger farm ropes, which were not too dissimilar to the yacht ropes (sheets).

After a night of celebrating our re-union in Gosport with my fellow clipperatti we set offshore for 7 days to sail around the clock in watches and a 250nm cross channel race against the rest of the Clipper Race fleet.

The first 4 days concentrated on intense training which included towing another Clipper Race yacht, boat to boat transfers of supplies and a casualty, fire safety, collision and flooding drills and a live Dan buoy AIS test. We immediately went into our watch system with half the crew on watch and half off.  This works out a four hour watch system at night 12- 4am, 4am – 8am and six hours during the day 8am – 2pm, 2pm – 8pm allowing enough time to sleep, eat and have a wet wipe wash!

I particularly enjoyed the night sailing, it was magical. Regarding my role, I am happy to do everything, from helming, being on the foredeck and in the cockpit. I don’t feel that I am a particularly skilful sailor so am happy when others give me advice or remind me on something. However in the galley I know I can come into my own, and catering for 19 with 1 or 2 rings at a 45 degree angle does not phase me. We had some hard sailing and when I produced the one and only pudding of the week which was received so well on a off and on watch I knew I could be one of the crew who kept moral up when things got tough.

I got butterflies as our first race approached. To see nine clipper yachts at race start was amazing and the tension and competitive feeling was strong. We headed from Gosport to Portland Bill, then over the channel to France and back again, covering 250nm. Unfortunately we experienced many problems along the way and did not gain a place on the podium but as a team we were strong and led by our skipper we smashed the skill in gaining ground when the opportunity was there.

I was really sad to leave the team and Gosport to head home, it had been amazing. It was exactly the experience I had signed up for and the memories will be there forever. Roll on the North Atlantic next year. 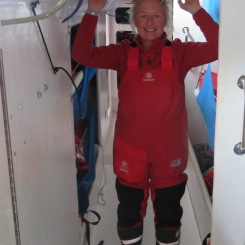 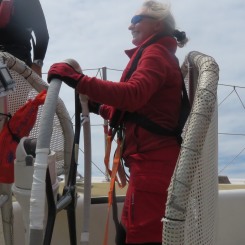